Click Here to see the Liturgical Info about  Today's Liturgy

Return to top of Page

To Be Forgiven Is to Know God
If we can learn to trust God, the next movement of our soul is to trust ourselves.
I’ve told many people over the years to trust themselves. It seems glib and facile. Yet I’ve received so many letters thanking me for saying that. Apparently, no one has told many Christians they could trust themselves.
What an unsafe and unexciting world we have created. Jesus tells us in the Gospels, “Don’t be afraid.” He’s saying it is radically okay.
You can trust yourself “because God trusts you, using your journey, your experience. Nothing will be wasted; all has been forgiven; nothing will be used against you.
In fact, God will even use your sins to transform you!
As Julian of Norwich heard from Jesus, “Sin shall not be a shame to humans, but a glory…. The mark of sin shall be turned to honor” (chapter 38, Showing 13 of Revelations of Divine Love).”
Excerpt From
Everything Belongs
Richard Rohr
LENT INFORMATION
Click on the one you wish to view
April 11 Second Sunday of Easter
Sunday of Divine Mercy
LENT INFORMATION
Click on the one you wish to view
The ​folded napkin
Then Simon Peter arrived and went inside. He also noticed the linen wrappings lying there, while the cloth that had covered Jesus' head was folded up and lying to the side.
Was that important?
Absolutely!
Is it really significant?
Yes!
In order to understand the significance of the folded napkin, we need to understand a little bit about Hebrew tradition of that day.
The folded napkin had to do with the master and servant, and every Jewish boy knew this tradition. When the servant set the dinner table for the master, he made sure that it was exactly the way the master wanted it. The table was furnished perfectly, and then the servant would wait, just out of sight, until the master had finished eating.
The servant would not dare touch the table until the master was finished. Now if the master was finished eating, he would rise from the table, wipe his fingers and mouth, clean his beard, and wad up the napkin and toss it onto the table. The servant would then know to clear the table. For in those days, the wadded napkin meant, “I’m finished.”
But if the master got up from the table, folded his napkin and laid it beside his plate, the servant would not dare touch the table, because the folded napkin meant, “I'm coming back!” 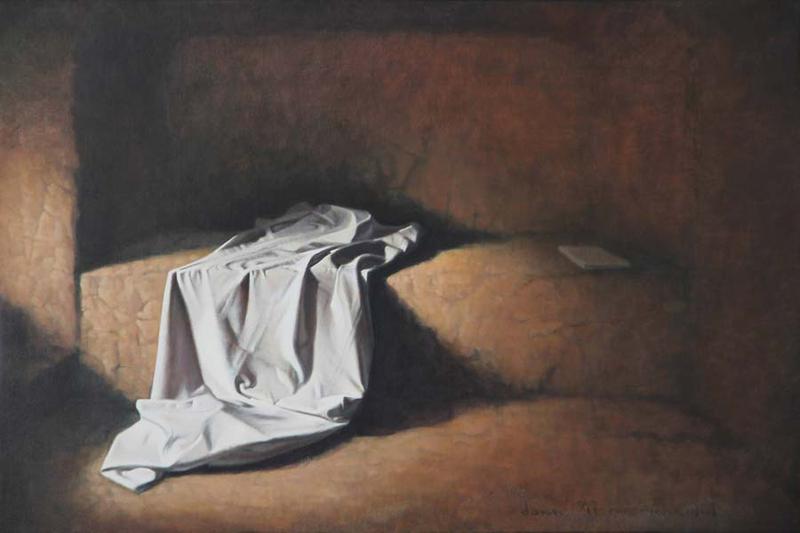 April 11, 2021
Second Sunday of Easter
Also Devine Mercy Sunday
EASTER  READINGS
and Reflection
This is too interesting not to repost