1
INRI
by Paul Turner
Atop a crucifix in a Catholic church or home is sometimes found the inscription INRI. The letters commonly appear on a banner affixed to the uppermost quadrant of the cross above the head of the crucified Christ.
Not all crucifixes bear the letters, but many do. The letters abbreviate the Latin inscription lesus Nazarenus Rex Indceorum, or "Jesus the Nazarene, King of the Jews," According to John's Gospel (19:19-22), Pontius Pilate ordered this inscription to give the name and hometown of the victim and to publicize the grounds for his execution.
Soldiers wrote the words in Hebrew, Latin and Greek — the languages of the Old Testament, the Roman government and the New Testament. In Christian art, the words are sometimes completely spelled out, but more commonly the Latin text is rendered as a simple acronym.
The chief priests of the Jews objected, saying that Pilate should have written, "This man said, I am King of the Jews." Pilate refused to change the text. His reply became a chilling aphorism of authority in Latin: Quod scripsi scripsi. "What I have written, I have written."
Thus Pilate let stand the words intended for condemnation, now transformed as affirmation. Pilate would not acknowledge the kingship of Jesus in the trial, but he proclaimed it publicly — if sarcastically — on the cross.
The inscription appears in the other Gospels (Mk 15:26, Mt 27:37, and Lk 23:38), each time with slightly different wording. These are the only known words
written about Jesus during his lifetime. To believers, they affirm the humanity and divine royalty of Jesus.
In Rome, the Church of the Holy Cross in Jerusalem claims to have the relic of the original sign. 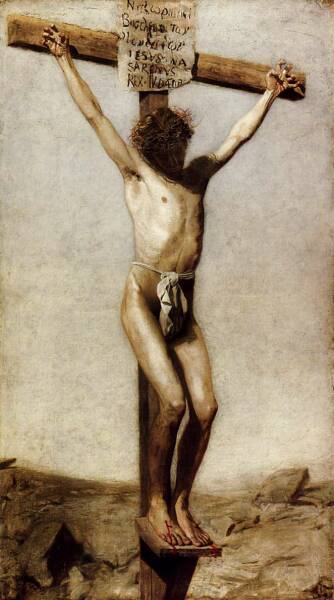 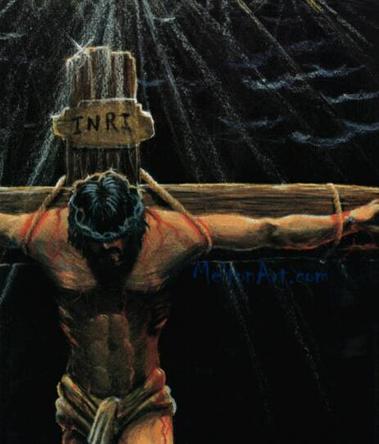